How safe are socket covers for plug sockets?

Did you know the government doesn’t regulate plug socket covers? It is an emerging debate, over the necessity and safety of the socket covers which prevent children from sticking their fingers into the pin sized holes.

What people don’t know is that British plug sockets already have a built in safety spring mechanism, which socket covers override.

Two professional engineers and Institution of Engineering and Technology (IET) members launched the website Fatally Flawed to help raise awareness among the public.

The IET have previously campaigned for socket covers to be banned, as most of the public are unaware of the built in safety shutters and choose to turn to socket covers as the “safe” choice.

As children are naturally inquisitive, it is second nature for parents to assume they need socket covers to protect their child. However, anything you use, children will automatically find fascinating, including socket covers. Be wary of any electrical items that are left within reach and could pose a danger if plugged in.

British plug sockets are fully regulated by the government and BS 1363 sets the British standard for 13 amp sockets. The regulation states that the power socket must be safe and include internal shutters in order to stop children from being able to shove objects into them.

It’s important to check the plug sockets in your home to check if they comply with BS 1363.

The design dates back to 1947 and the British safety standard means the top hole (earth pin) in the socket contains an internal shutter. Only when you insert a plug with a top earth pin is the internal shutter opened, which then opens the bottom two live pin holes of the socket.

The concept is that you cannot poke or shove anything into the live holes unless the earth pin is inserted. Some sockets even require the insertion of more than one pin at the same time in order to function.  Members of the IET have argued during campaigns that there have been no cases of children being harmed from uncovered sockets since a new design of socket was introduced in 1990.

If a socket cover is removed and shoved in upside down (with the earth pin inserted) it then unlocks the two live holes and their internal safety shutters. The socket then becomes live and dangerous as the safety feature has been overridden.

The safety shutter mechanism that is built into our sockets is there to protect everyone, without the need for covers. 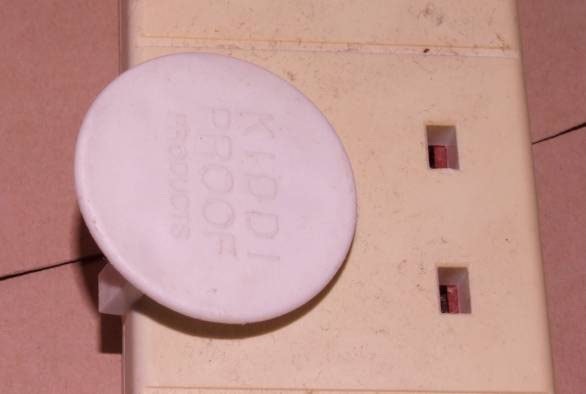 Oversized pins can lead to damaged sockets and loose connections when a proper sized plug is inserted into the socket. Thick pins can also pose as a potential fire risk, as socket pins needs to fit snuggly in order to avoid overheating.

Debates are occurring within Europe over socket covers, but the question is not regarding safety testing and regulating, but whether or not to ban them in countries which already have safe plug sockets, like the UK and Ireland.

Do you need socket covers?

UK sockets with no covers are in fact safer than UK sockets with covers. The risks are greater when there is a cover involved. Due to lack of regulation of socket covers, it is impossible for the government to guarantee the safety of covers.

Nothing is 100% effective, as an empty socket can present the opportunity for a child to plug an item in that could cause a fire or burns and a socket cover can be seen as something interesting to play with. The aim is not draw attention to plug sockets, so the child doesn’t find them interesting to play and experiment with.

The important message is that you do not need socket covers to make your plug sockets safe – they are safe already! It is also important that you make sure you have an RCD fitted in consumer unit or plugged in, to protect from a fatal electric shock and also reduce the risk of fire.

This information applies to BS 1363 regulated UK sockets, if this does not apply to you, please seek professional advice for further steps of changing your sockets to comply.

If you’re interested in finding out more about children’s electrical safety, then check out our blog!