Inside the consumer unit

The electricity that powers your home has one source, the consumer unit (otherwise known as the fuse box), and it controls and distributes the power in your home through different circuits.

In our third instalment of ‘Inside the Wiring’ we are looking inside the consumer unit and explaining what’s inside, as well as things to look out for and FAQs for both homeowners and electricians.

The consumer unit is responsible for powering all the circuits in your home and is made up from various parts, such as: mains switch, residual current devices (RCD’s), and circuit breakers. You should always know where your consumer unit is located, in case of emergency and you need to turn it off or on. 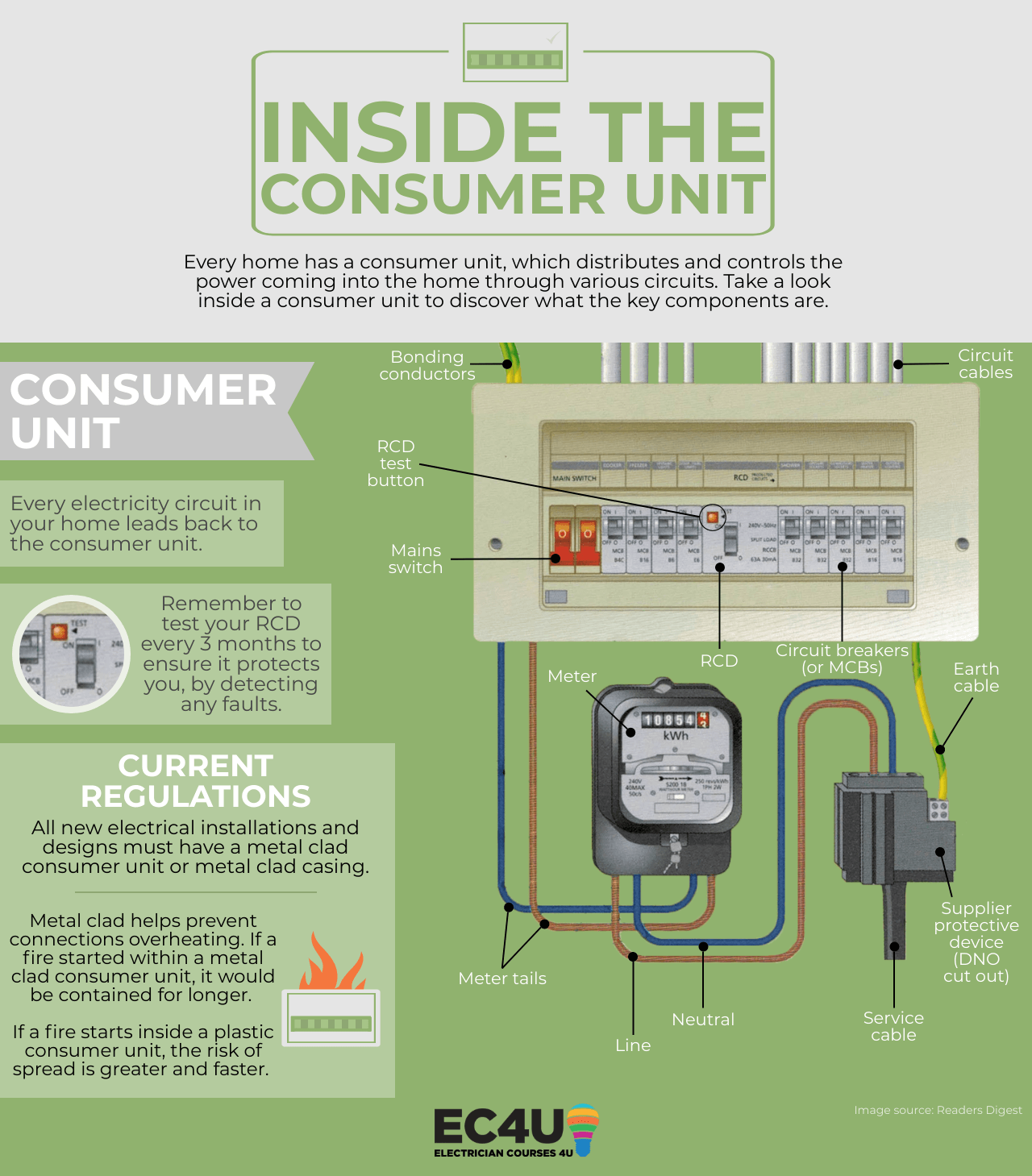 To share our ‘Inside the Consumer Unit’ infographic on your website, simply copy and paste the embed code below:

Plastic consumer units are still commonly found in homes across the UK, as it is not illegal to have one, they are just not considered as safe as metal clad. The IET recommend an inspection by a competent electrical person to be carried out on the installation of the consumer unit and all associated switchgear, to ensure that they are safe and do not pose a fire risk. Within that inspection the age, condition and positioning of the consumer unit would also be taken into consideration.

Plastic consumer units under wooden stairs are seen as a higher fire risk, as they can potentially obstruct the only fire exit in the home, can have a lack of ventilation for fire to escape and any possible nearby flammable objects.

What makes up a consumer unit?

The main switch controls the electrical supply in your home, and allows you to turn it off and on. Everything within your consumer unit is controlled by the main switch (your RCDs and circuit breakers).

Residual current devices (RCDs) are life saving devices that turn off the power immediately upon finding a fault. This is to prevent you from touching something live and getting a fatal electric shock. They are constantly running and monitoring the flow of electricity in your home.

As of July 2008, the Wiring Regulations states that all new or rewired homes must have RCD’s fitted. Fixed RCD’s are the most common and are the ones in your consumer unit and give you protection over a group of circuits.

On average, each house has 6 circuits, each controlled by a circuit breaker within your consumer unit. Like RCD’s, circuit breakers will also trip and turn off immediately when they detect an overcurrent fault, this is also to protect you from any risk of shock.

For example, if you have a 6 amp circuit breaker and it detects 8 amps of continued current, it will trip and stop the flow as it has detected an overcurrent fault.

When circuit breakers trip, you can try to turn it back on, but it should be advised that you seek the advice of a registered electrician first to find out where the fault lies. Circuit breakers trip for a reason and you should always investigate further.

Circuit breakers work by either a thermal method with an overload function, for example 8 amps flowing through a 6 amp breaker, or by a magnetic principle, where you will get a short circuit when the magnetic element kicks in and then disconnects the circuit breaker rapidly.

You probably won’t ever see the bus bar, as only those who are working on the consumer unit, like a registered electrician, will see it. It is a long strip of copper, which has big teeth on it to lock the circuit breakers, mains switch and RCDs into place securely.

Dangers to look out for 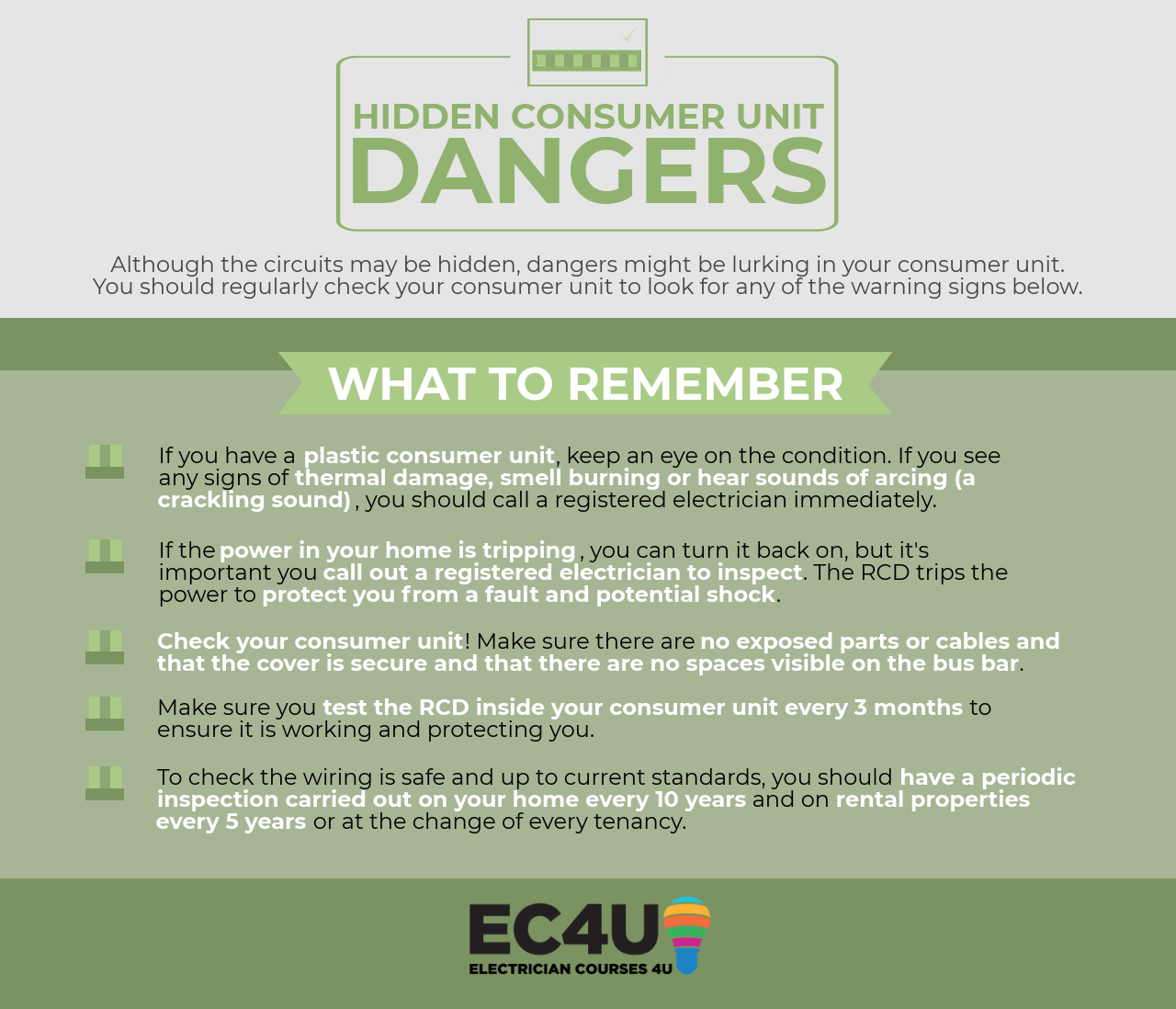 To share our ‘Hidden Consumer Unit Dangers’ infographic on your website, simply copy and paste the embed code below:

If you have a plastic consumer unit, make sure to keep an eye on the condition. If you see signs of thermal damage, smell burning or hear sounds of arcing (a crackling sound), call a registered electrician immediately.

Signs of burning or warping of the plastic cover can be clear identifiers that something more sinister is lurking.

If you are regularly getting power cuts in just your home, then you should contact a registered electrician to come in to look at the circuits in your home. There is a reason your power trips, to protect you from a fault and potential shock.

If you have never checked your consumer unit, now is the perfect time to! Make sure there are no exposed parts and that the cover is secure, you should never be able to get a finger in at any point and there should never be any spaces visible on the bus bar.

If your consumer unit has a wooden back, fuses present inside as well as cast iron switches, it will need to be replaced as it probably is older than the 1960s and considered unsafe.

Make sure you test the RCD within your consumer unit every 6 months to ensure it is working and protecting you.

It’s advised that you have a periodic inspection carried out on your home every 10 years and on rental properties every 5 years or at the change of every tenancy. This is to ensure that your wiring is safe and complies with the Wiring Regulations.

Who can change my consumer unit?

Only a registered electrician should change your consumer unit. This is because a consumer unit change falls under notifiable work in Part P of the Building Regulations.

Remember, if you are having notifiable work carried out on your home then you should receive the following electrical certificates after the work is completed:

My RCD keeps tripping in my house, what should I do?

Your RCD is tripping for a reason and it could be that there is a fault in a circuit, and the RCD trips at the point of fault. Don’t simply just turn the power on and forget about it, call a registered electrician out to check the consumer unit and the circuits for a fault.

I’m just about to buy a property, what electrical checks should I do?

If you encounter asbestos on site or suspect it, dispose of it carefully, while following the HSE guide for dealing with asbestos.

There are undersized tails for the size of cut out fuse, what do I do?

Why does the RCD keep tripping after the consumer unit change?

The common reason is because you may not have done any prior testing before consumer unit change. If the insulation is leaking and all insulation does leak from new, an excessive amount of leakage to earth would cause the RCD to trip, as that is what it’s job is. A quick blanket test to check the integrity of the cable before you carry out a consumer change could identify this problem before you carry out the consumer unit change.