How much electricity does your home use and what does it cost to run?

With the huge energy price increases, people have never been more conscious of the energy usage. It’s important to look at the expensive appliances in your home and see how you can try and save money.

We have collated the average amount of energy your appliances use every year, so you can find out just how much it is costing you.

Something as simple as switching your appliances completely off instead of leaving them on standby, could help you save every month, or it could mean opting to buy an appliance with a higher energy efficiency rating.

All costs below are calculated using the UK average energy rate of 28p/kWh (April 2022 tariff). Please understand that tariffs do vary based on your location and a cheaper tariff may be available where you live.

To share our ‘How much electricity does your home use and what does it cost to run?’ infographic on your website, simply copy and paste the embed code below:

What does your electricity cost?

Working out how much an appliance costs to run is actually simpler than you may think. All electrical appliances in the home come with a power rating, normally displayed in kW (kilowatts) and electricity is sold to homes by the kilowatt hour (kWh).

To calculate the running cost, simply take the power rating (kW) and multiply that by the number of hours it will be running for and then multiply that number by your tariff rate.

UK homes use on average £3.4 billion worth of electricity every single year, with the national usage being around 3,940kWh per home.

Bigger houses, often detached, will use more electricity and closer to the national average, whereas flats or terraced homes will use much less, at around 2779kWh every year.

Running costs and electricity usage depends on the size of your house, your current tariff rate and how efficient your home is, as different appliances have different power and efficiency ratings.

The Fridge/Freezer is the one appliance in your home that never gets turned off. Combi fridge-freezers are the most expensive to run, with a standard combi using 427kWh/year costing £119.56.

However, if you own a combi fridge-freezer with an A+ energy rating, it will likely use around 200kWh/year costing £56. It’s important to look at energy ratings of the appliance when you are buying, as they can help save you money over a long period.

It has been estimated that a 32” LED TV that is used for 4 hours every day, uses 50kWh/year costing £14. However, an LCD flat screen uses 199kWh/year costing £55.72. The steep increase again comes down to modern new LED technology and improved efficiency ratings.

If investing, make the move to LED TV’s and save yourself money every year or allow yourself a few extra hours in front of the TV.

It comes as no surprise that washing machines use a lot of electricity. With an average of 270 cycles every year per home, your machine could be using 166kWh/year costing £46.48.

Each cycle can vary between 0.3kWh and 1kWh, depending on the spin cycle, temperature, size (kg load) and efficiency rating.

The cost can vary depending on how much you use it, the type of tumble dryer, the load size, the setting and energy efficiency rating on the appliance.

If you’ve updated the lighting in your home to LED, then you will already be saving money every year. Based on an average two hour usage each day, LED lighting uses 9kWh/year costing £2.52.

However, if you still use halogen light bulbs, then you might consider switching as they use an average 31kWh/year costing £8.68.

The cost of using other appliances in your home can vary, depending on how often they are used. A toaster is likely to use an average of 21.9kWh/year costing £6.13 to run.

Kettles can prove to be expensive when more water than what is needed is boiled. The average kettle uses 167kWh/year costing £46.76 to run. It’s important that you only boil the amount of water you need, so you don’t use more electricity than necessary.

Kitchen appliances are notorious for using a lot of power, which is why if you can get a more energy efficient appliance, it can help save you money in the long term. Dishwashers use on average 294kWh/year costing £82.32 to run. Most dishwashers will have eco settings where you can select a lower temperature or a shorter cycle.

Games consoles get lots of use in homes and the cost of that can rise quite quickly. Different gaming systems have different power ratings and can cost more, however the average games console uses 47.6kWh/year costing £13.33 to run. Wii consoles are cheaper than this to run, but Playstations are often more.

Dehumidifiers are considerably the most expensive item you could run in your home. On average, they use 525kWh/year costing £147 to run. They are more expensive than your combi fridge-freezer you have on constantly in your home and are used for fewer hours too.

How to save money on your energy bills

Turn off any unnecessary appliances that are on standby mode. Something this simple could help you save up to £55 on your bill every year, which over time quickly adds up.

Only boiling the amount of water that you need in the kettle can help save you around £11 every year.

Always remember to compare energy tariffs too, as this could make the difference in saving money at the end of the year. 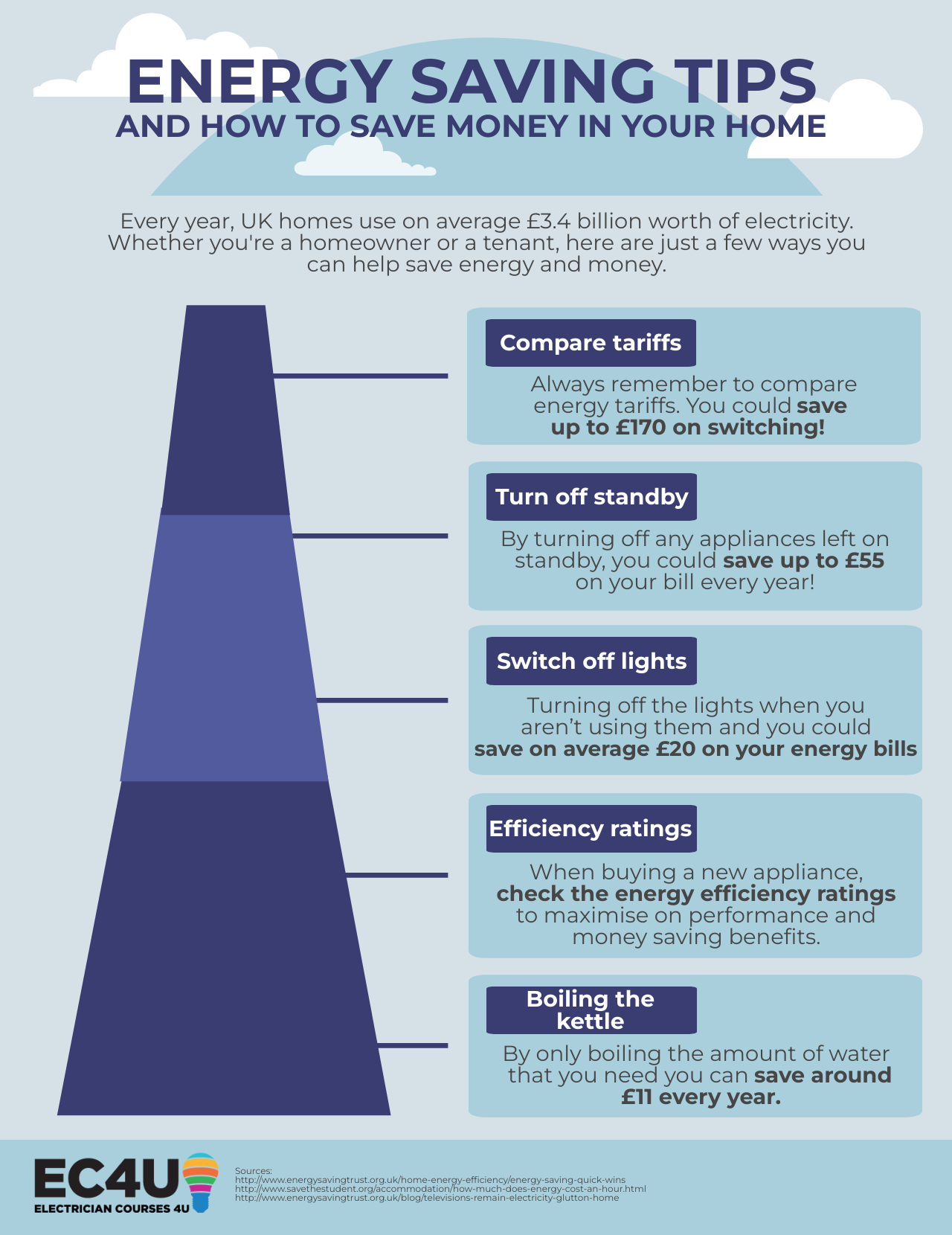 To share our ‘Energy and Money Saving Tips for your Home’ infographic on your website, simply copy and paste the embed code below:

Energy efficiency ratings are important to consider when buying new appliances as a higher rating can mean it will help save you money and electricity. Use the ratings as a guide to get the optimum performance and money saving benefits from your appliance. The energy efficiency guide was put in place to help you choose the right appliance for your home.

Always look at the label for an energy efficiency rating and make sure you choose an efficient appliance which will ultimately help you save money on the bills every year.

Read on to find out more about energy saving myths and whether any of them can save you money!